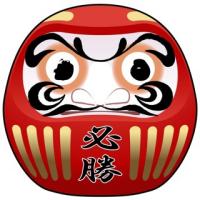 On 10th January 2014, an important event was held in SIVA: the delivery of the daruma of the 3S to the company.

What is the daruma? The daruma (達磨 daruma) is a traditional Japanese doll, a votive figurine with a deep meaning, which is a stylized man with a beard and mustache and round and white eyes, and with a bit grouchy look.
In Japan people are used to drawing a single pupil with black ink when they make a wish or a resolution.
When the wish comes true or the purpose is achieved, then the second pupil will be drawn.

The gruff appearance of the daruma perhaps means that in order to get to the purpose it is necessary to deal with what we do not like, and overcome resistance to change inner and outer.

Since the daruma has its center of gravity down, if pushed to one side or upside down, it straightens itself: for this reason the daruma is a symbol of confidence and optimism, perseverance, tenacity and strong determination. An old nursery rhyme describes the Japanese daruma:


Once! Twice!
Always the Daruma in its red dress
Heedless sits back!

As long as the wish is not fulfilled, or the purpose is not reached, the daruma is kept on display in an important place; and there is the custom of keeping one daruma at a time.

In SIVA a daruma was on the desk of Managing Director Lorenzo Antonelli with only one pupil; the purpose associated with this daruma was the full realization of the 3S in SIVA. On January 10th 2014 Lorenzo Antonelli drew the second pupil, and he gave the daruma to the foreman Piergiorgio Caporaletti in front of the fully gathered company staff.

The 5S arrived in SIVA in October 2008 after Lorenzo Antonelli came back from a study trip in Japan. At Yamada Ltd of Osaka he learned about the 5S directly from Mr. Yamada and his staff, who our entire company expresses its thanks and gratitude to. In SIVA we decided to make good the first three, and to leave out the last two (which are more complex) from the practice of the previous three.

The method of Five S (Seiri-Sort, Seiton-Straighten or Streamline, Seiso-Shine, Seiketsu-Standardize and Shitsuke-Self-discipline) is a simple (seemingly simple) and basic one which has dramatically changed for the better our company; it is a practice that, starting from the most immediate things, such as tools, equipment and the environment in which we operate every day, grows the awareness and presence to reality, individually and collectively; the 5S are an exercise that leads back to the here and now.

The 5S are the basis of each method for continuous improvement: working on awareness, they create the basic conditions for the improvement in the company at all levels.

The results of the Five S have come gradually and increasingly since the very first year. In the first quarter of this year SIVA was among the first positions in a ranking made up of ninety-four in the index of supplier reliability of ABB (factory of Frosinone): we got this thanks to the 5S.

Now we are willing to teach the 5S to those who are interested. As Yamada has given us this knowledge, now SIVA is happy to pass it on to other companies that want to learn it. This, too, we think, is a way to make a tangible contribution to the common good.